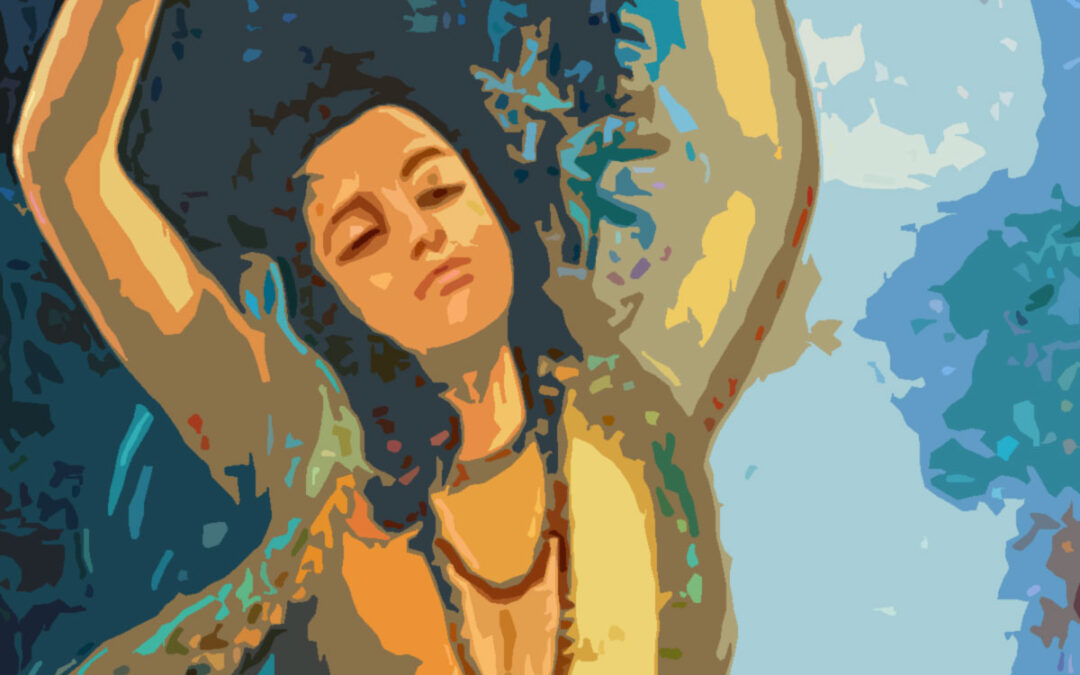 How much does our spiritual development depends upon the mercy of Lor Nityananda?
Recorded in SCS Math, Nabadwip, 25.2.2021.

After offering my most humble respectful obeisances unto the lotus feet of my Guru Maharaj, Guru pada padma, all the Guru-varga I also offer my most respectful prostrated obeisances at the holy lotus feet of His Divine Grace Lord Nityanada Prabhu. One who is known as non-different from Lord Gauranga and Baladeva Prabhu, and  ultimately from Radha Krsna. Today is His most auspicious appearance day, we call it  Nityanada Trayodashi. This day is famously known as Nityanada Trayodashi in the society of devotees. This trayodashi tithi, which comes after Varaha Dwadashi, has been so much blessed by the divine appearance of Lord Nityananda. We all know that He made His divine appearance in Ekachakra Dham, Lord Nityananda’s birth place. Many  devotees have already visited Ekachakra dham.  Today, a great festival is going on there. A festival of distribution of mahaprasadam of Lord Nityananda Prabhu. A festival of His great auspicious appearance. Today all the devotees of Lord Nityananda Prabhu are in a great festive mood, because this earthly planet was blessed with the advent of Lord Nityananda – one of the Pancha-tattvas –  considered to be a direct expansion of Lord Gauranga, Baladeva Prabhu, our Guru-tattva. Hare Krsna.

Sometimes, for the ordinary people it may be a bit difficult, sometimes very difficult, to really understand about Lord Nityananda Tattva, the transcendental character of Lord Nityananda, because He has got the avadhuta characteristics. Avadhuta means that he lives his life beyond normal rules and regulations of the spiritual society, or any society. Because His avadhuta lifestyle is always influenced by the play of the sweet will of the Supreme Lord. His lifestyle, His way of life, doesn’t necessarily always follow the normal social ways and norms. Rather, avadhuta‘s life manifests beyond the normal rules and regulations, normal ways of the society, normal ways of the understandings of  people, even  ordinary devotees, because he is avadhuta. Avadhuta means one who lives spiritual life transcending the limitations of  normal ways. Transcending all the limits of the normal social ways, and ways of understanding. But His avadhuta way is always well understood by the Supreme Lord and by the exalted devotees who have the superior ability of supernatural understanding – transcendental spiritual understandings. Exalted devotees know who  avadhutas are. Avadhuta‘s lifestyle, his way of life, is actually fully controlled by the sweet will of the Lord. It’s like a playground of the sweet will of the Lord. Lord Nityananda Prabhu is known to be an emperor of all the avadhutas – mahabhagavata avadhutas – whose all life activities cannot be actually comprehended by ordinary intelligence, or understanding, by ordinary people, common people and even common devotees. He has got transcendental characteristics, transcendental nature, because avadhuta‘s life always manifests the truth, higher divine truths of transcendence. In transcendence. Revealing the divine ways of transcendental truth of Krsna consciousness – that is Lord Nityananda Prabhu and His life. Some people may think, and they often ask, that the way  Lord Nityananda Prabhu outwardly appears although He accepted the renounced order, He also sometimes accepted lots of enjoyment and did not always move, or present Himself in a very renounced way of a totally renounced personality.

This sort of mundane enjoyment needs to be understood in this way: Nityananda Prabhu was actually making His own beloved Lord enjoy all that in His heart, but He was not personally or directly interested in it. So, although avadhuta is considered to be a great individual, a great personality, a great devotee, a great incarnation of the Supreme Divine, he or she has got a separate existence, yet that existence is so closely related with the original existence, presence of Supreme Absolute God,  Supreme Absolute Truth, Krsna, through achintya bheda abheda principle. Avadhuta‘s lifestyle cannot be judged as a different separate way from the direct sweet will of the Lord and the direct manifestation of the Supreme Absolute Lord. In other words, avadhuta means a life of realization of the Supreme Divine Lord and His supreme will. So filled, so captivated, so much influenced, by a certain lila of the Lord – that is Lord Nityananda Prabhu. I am explaining  this in detail for the proper clarifications of the understanding about the avadhuta lifestyle.

Some people often ask why we see so much personality worshipping in our Gaudiya Vaishnava tradition, in the world of Krsna consciousness. We are worshipping Lord Nityananda, Advaita Prabhu, Gadadhara Prabhu, Pancha-tattva, Srivas Prabhu, Sriman Mahaprabhu… Some people do not easily understand the concept of the specific personality worshipping in the spiritual life, because mostly they have the concept of the Truth, the Spiritual Truth, the Universal Spiritual Truth more  in the impersonal energy form, an impersonal energy way rather than in the personal form. Krsna devotees are not ordinary personality worshippers. Here, the personality and the tattva,  the Spiritual Truth, the essence of the higher divine truth, become one. They become unified into oneness. Therefore the spiritual personality becomes the direct representation or expansion of certain spiritual truth, tattva, divine principle of the absolute divine truth. And that very divine principle of  tattva, of the Absolute Truth, becomes the personality. They become so closely unified with each other, that at some point they become the representation of each other. No difference really remains between a divine personality and the divine truth. Tattva of Krsna consciousness is manifested through that personality. So, worshipping or adoring that divine truth, that divine tattva and also adoring the very personification (incarnation, or direct representation) of that same tattva (divine truth), becomes one and the same. They become inseparable from each other. Therefore we have to understand  why we worship or adore a particular high class exalted spiritual personality. It is not considered just a personality worshipping. Holistically it also means worshipping and adoration of the tattva, or the higher divine truth  manifested through that personality. Lord Nityananda Prabhu is that kind of exalted spiritual personality. Hare Krsna.

So we often find that sort of personal manifestation of certain divine aspects of the Absolute Truth, certain tattva, through certain exalted personalities, in very transcendentally mystical miraculous ways. It never remains limited only within some type of mundane personality worshipping, because that personality becomes a higher medium, becomes the medium of the revelation of divine tattva. Worshipping of a great personality of avadhuta is as good as worshipping the Supreme Personality of God. Hare Krsna.

Guru Maharaj simply felt and realized that chanting and singing the glories of Lord Nityanada means directly singing the glories of Mahaprabhu, Radha and Krsna. We all know that Lord Nityananda Prabhu is none other than the incarnation of Baladeva. He is non-different from Him. Lord Nityananda is non-different from Balarama. Sometimes we use terms like expansion and incarnation just to express the non-difference between them. Lord Nityananda is actually the non-different Self of Baladeva, Balarama, Guru-tattva, who is the non-different Self of Krsna, direct second Self of Lord Krsna. Who also serves Srimati Radharani and Krsna as Ananga Manjari, Radharani‘s sister in the divine madhurya rasa prema, madhurya rasa pastimes of the Divine Couple. Thus we find Lord Nityananda, Baladeva Tattva to make different kinds of expansions of Themselves to promote Krsna lila to enrich and enhance the lila of Radha and Krsna in different ways. The same Baladeva tattva manifests in 10 different ways to supplement and complement the activities of the lila of Radha Krsna. For example he manifests as asanas (seats), simhasanas (thrones), all the worshipping paraphernalia such as worshipping utensils, ghantas (bells), flowers, chandan, the Lord‘s bed, His shoes, His clothes, His crowns, and so many other ways. Even the flute that Lord Krishna plays, the musical instruments that Srimati Gandharvadevi Radha Thakurani and Asta-sakhis and Vraja-gopis play – all are expansions of Baladeva tattva. Mrdangam, karatals, all the musical instruments that we play and which are dearly used in the loving service of the divine couple, Radha-Krsna Candra, all are actually expansions of Baladeva-tattva. All the decorations, the  surroundings, the environment are organized by the manjaris and sakhis and Vraja-gopis to enrich, enhance and promote Radha-Krsna lila. The whole environment is  in many significant ways expansion of Baladeva tattva.

And Lord Nityananda is none other than Balarama. What is the criteria of Baladeva tattva? Bala-Deva. Bala means strength and Deva means godliness, personification of Godliness. So divine strength and godliness are both combined in His character. Balarama is the combination of Balam and Rama characterestics. Balam means again divine strength and power, potency. Divine potency. And Rama means pleasure giving nature – divinely pleasure giving character, that is Rama. So both characteristics are actually combined in the character of Lord Nityananda. In other words, Balarama‘s characteristics are combined in the life of Lord Nityananda. The nature of the glories of Lord Nityananda is infinite. It has got multifarious characteristics. I am simply trying to touch on certain points. In all religions, in all great spiritual families, we find that when the Supreme God or Supreme Goddes make His or Her appearance, not only does He or She appear, but also alongside They cause or invite the appearance of their great close beloved associates. And those principle foremost associates represent different tattvas – higher divine principles, essential aspects of the supreme God and Goddess. Those associates are not just some ordinary personalities of some common devotees, but actually, they are the personalities of certain divine truths, certain divine aspects of the essential truths. Therefore they are called incarnations, they are beyond the limited concept of the high-class personality – they are much beyond that. They are living personifications of certain higher divine principles of the Absolute Truth, Absolute Good. Lord Nityananda‘s personality must be understood in that way. A great personality, an incarnation of the Divine Absolute Truth – that is Lord Nityananda.