20-15. Are the Jivas Eternally Conditioned? 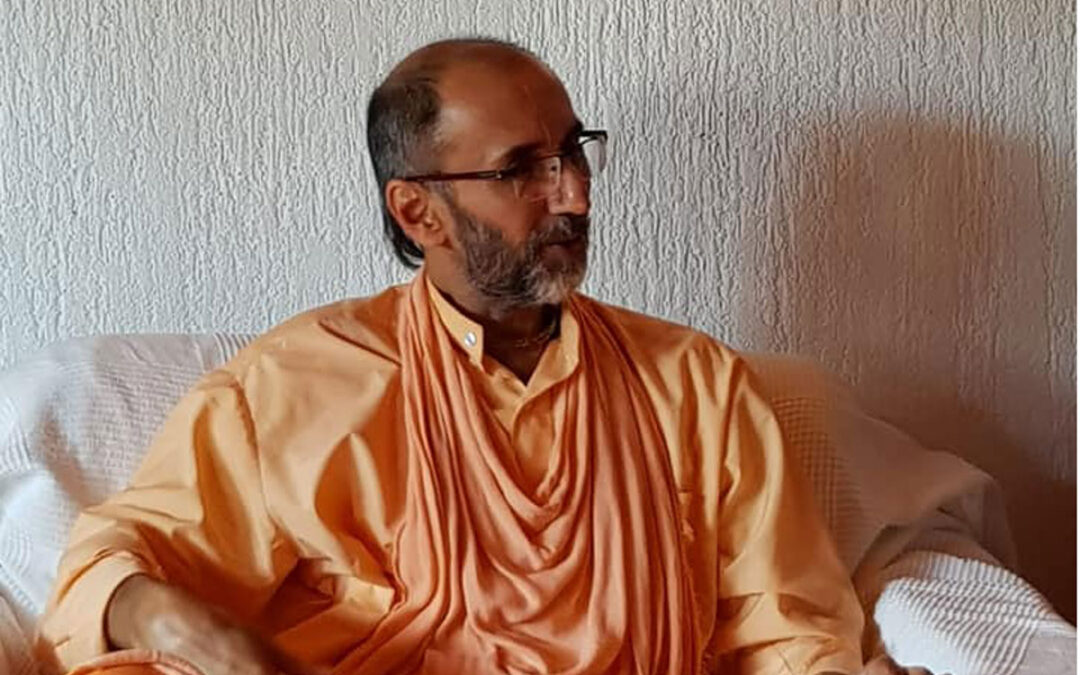 Pranama Maharaji. I would like to know about your personal stance regarding two following issues:

a) if bhakti is inherent or not in the jiva
b) if the conditioning of the jivas has a beginning in time (falling from Brahman for example) or do you suscribe to the theory of anadi-karma?
Bhakti Nandan Swami Maharaj:

a) On the whole, certain fundamental notions or tendencies of Bhakti are already inherent in the constitutional nature of a jiva (it’s something as potential or prospective), but (yet), some new seeds or tastes of it (the bhakti) can definitely be newly given or created in or awarded (by Sadguru) to a jiva to be freshly cultivated further in harmony with his own natural constitutional tendencies or potentials of taste (of bhakti).
Something is awakened in and something cultivated anew…
It’s, in fact, one harmoniously unifying system in which something or some portion is pre-destined and the other portion is newly awarded… (consisting of both characters – static and dynamic)…

b) the conditioning (with karma) of the jivas does have a beginning in time, but that’s time immemorial, meaning it happened so long ago that it’s beginning has been unknown… hence it’s called as ‘anadi-karma’ in a relatively absolute sense, but never in absolutely absolute sense. Because, a jiva, as a member of Lord’s marginal potency, is understood to be free from the ‘mayik’ or material conditioning by it’s own constitutional nature or position. But due to some misuse of his free will and free-choices, somehow or other, he makes a start to get involved in ‘karma’ or mundane activities i.e. actions-and-reactions which is created by the jiva at one point of his life and it’s well-understood that every creation has a starting point of time, no matter how long ago… how immemorial it is…

The word ‘anaadi’ means ‘without beginning’ or ‘beginning-less’ and ‘karma’ means ‘fruitive actions or activities of a jiva that binds him i.e. conditions him with mundanity. Hence, ‘anaadi karma’ indicates conditioning actions/activities with no beginning point in time.

(Note of clarification: It’s well understood that any eternal flow which has no beginning, also cannot have the end. Because, the end means it has to begin again in order to continue in future. On the other hand, ‘ending’ in future also indicates that the ‘same ending’ might have happened in the past too, following it’s own inherent i.e. constitutional character and in such case, ‘anaadi-character’ or the character of ‘beginning-less-ness’ becomes simply absurd or unrealistic due to self-contradiction. Therefore, something beginning-less means also endless by normal character and that’s marked as eternal.)

So, in other words, ‘anaadi karma’ means eternal flow or current of the conditioning actions of a jiva soul.

(Note of clarification: Let us know that there are no real conflicts or contradictions in Mahajana’s statements made either in the relative sense or in the absolute sense. All we need is to have the harmonious understanding/s of the Siddhanta/s with appropriate vision/s.)

Now, in reference to the ‘anaadi karma’, the main point is exactly which is beginning-less or eternal? Is it:

b) it’s actually the CONTINUED LAW of karma, i.e. EVER-CONTINUED SYSTEM or PROCESS of karma?
The answer is (b) and not (a), since every karma or action whether individual or collective, is/are, in fact, created by the jiva/s. Because, no karma or action can actually be self-born. In other words, no karma is ever born on it’s own, but it is CREATED or PRODUCED by the jiva/s individually or collectively and anything, CREATED or BROUGHT INTO EXISTENCE IN A PARTICULAR TIME-POINT, HAS GOT IT’S BEGINNING. That’s self-evident. Therefore, the karma or action produced by a jiva or jivas CAN NOT BE BEGINNING-LESS or ETERNAL – just simple logic.

(Note of clarification: the karma and the law or system of karma are not one and same. Karma means the direct or indirect actions or activities performed by the jiva, either individually or collectively. On the other hand, law or system of karma indicates to the whole timeless process or flow of the karmic system going on eternally, accommodating, sheltering and facilitating all the individual and collective pieces of action or activitiy. As for example, continued cycles of birth, growth and death; creation-maintenance-destruction; pain and pleasure; loss and gain; positive, negative and point of neutrality; past, present and future; thesis, anti-thesis and synthesis, etc. – these inter-connecting, co-operating laws or processes are understood as eternal i.e. without beginning and end. But the each and every piece of individual/collective karma or activity/s that is/are taking place in the lap of [i.e. within the time-space-situation of] the aforesaid ever-ongoing laws or systems, has/have already GOT THEIR NATURAL BEGINNING/S and END/S/ and therefore, that/those is/are NOT OF ETERNAL NATURE. Hence, the CONDITIONING or BONDAGE CAUSED BY SUCH KARMA CAN NOT BE ETERNAL TOO, FROM THE ABSOLUTE STAND.)

Hence, a jiva can NEVER BE ETERNALLY CONDITIONED by his karma, AS SUCH CONDITIONING (for jiva) BEGINS ONLY FROM THE TIME WHEN HIS CREATION or PRODUCTION OF KARMA STARTS and NOT BEFORE. Therefore, anaadi-baddha or nitya-baddha (eternally conditioned) is stated rather in a RELATIVE sense i.e. conditioned from long and long ago…from time immemorial…and still conditioned at the present time and will be remaining conditioned for a long long time in future too… So the statement as nitya-baddha or eternally conditioned should NEVER BE UNDERSTOOD LITERALLY IN THE ABSOLUTE SENSE of reality that those jivas were already destined (pre-destined) to be in the compulsory bondage (conditioning) from their original marginal state of existence and shall never be delivered or liberated from such bondage or conditioning. No. Otherwise, in one hand,
a) the BLAME WILL COME ON MERCIFUL GOD FOR DOING SUCH INJUSTICE to those jivas by allowing or sanctioning such punishment of fatal bondage (for them) in eternity, and on the other hand,
b) ALL THE HOPE-GIVING AND PROMISING MESSAGES FROM THE HOLY SCRIPTURES AND THE SADHUS ENSURING THE DELIVERANCE OR LIBERATION OF ALL THE CONDITIONED JIVAS SOULS THROUGH SADHANA OR CULTIVATION OF DEVOTIONAL LIFE, WILL MOSTLY BE USELESS AND VALUELESS. That’s nothing but self- contradiction.

Some simple examples for further clarification – sometimes we use expressions such as ‘look at the unlimited ocean’, ‘countless stars in the sky’, ‘oh, countless, innumerable people gathered over there’ etc. But we understand that this is spoken just in the relative sense, and not in the absolute sense, because, this earthly ocean actually has got a limit; no matter how vast it is. So it’s not really unlimited. Likewise, the stars in the sky are all actually countable (not really countless), no matter how big number is that – like many many zillions. In a huge festive gathering, all people are actually countable i.e. never actually countless, no matter in what big number their gathering may be. Similarly, in the term ‘nitya-baddha’ or ‘eternally conditioned’, the word ‘eternally’ is stated more in a limited relative sense, like something that has been happening for long and long time from time immemorial, seemingly without beginning and end – yet, IN FACT, IT HAS GOT A BEGINNING AND END. Hence, such conditioning or bondage is NOT REALLY ETERNAL IN ABSOLUTE SENSE.

Krsna bhuli – being forgetful of Krsna or after forgetting Krsna; sei jiva – that jiva; anaadi vahirmukha – averse from Him from a time of no beginning / ………

Although it says herein, ‘averse from Him from a time of no beginning’, yet, ‘being forgetful of Krsna or after forgetting Krsna, that jiva became averse from Him’ — is very significant. It clearly means that THERE WAS A STATE OF LIFE OR EXISTENCE FOR THAT JIVA BEFORE FORGETTING KRSNA, WHEN HE WAS NOT CONDITIONED YET. But, thereafter, WITH THE BEGINNING OF HIS FORGETFULNESS OF KRSNA, THE CONDITIONING ACTUALLY BEGAN. So, THAT CONDITIONING HAD A STARTING POINT OR BEGINNING IN THE PAST IMMEMORIAL. THEREFORE IT’S NOT BEGINNING-LESS OR ETERNAL IN THE ABSOLUTE SENSE.