21-01 Was Ramananda Roy in Rasabhasa? 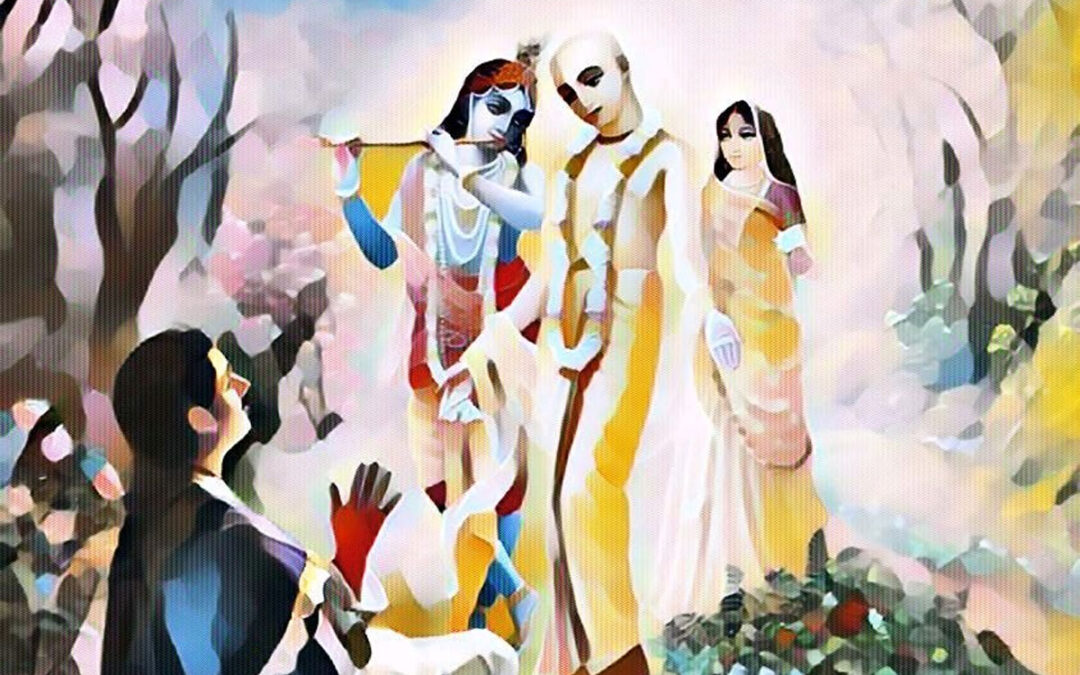 How can Roy Ramananda be Visakha Sakhi and Arjuna at the same time? Isn´t it creating rasabhasa? Recording from Nabadwip, 21.1.2021.

Ramananda Roy being an incarnation or expansion of Visakha Devi (by the status of his original identity in spiritual world), actually holding a higher position compared to Arjuna. Therefore, according to tattva-position, I have rather described Arjuna as an expansion of Ramananda Roy, although historically he (Ramananda Roy) appeared much later, i.e. subsequent descedant of Arjuna (as you compare to the age or era when Arjuna appeared in [Dvapara and Kaliyuga difference]).

Their common aspects, characters or qualities are – such as: Heroic nature, power, in-depth knowledge, tender-heartedness and above all – extreme, intense love for Krishna…

So when Arjuna has also got some Gopi connection at heart with some Vrndavana mood, then, the possibility of having ‘rasabhasa’ in their (Rai Ramananda, Sri Visakha sakhi and Arjuna’s) mutual relationships also get very much minimised or become completely absent.

Q. Did I understand well, that incarnation for example of Arjun means just time to time manifestation Arjun’s mood in Ramananda Ray, and Ranananda Ray is mainly incarnatiion of Vishakha?

Q. Or it means that Arjun was present as a personality in the form of individual soul in the body of Ramananda Ray? In this case how several though liberated souls can be present in one body,? There must be 2 or 3 souls then inside of one person. if they can not mix, in which way they show themselves: do they just manifest and hide themselves one by one according to the situation?

Answer : So Arjuna was not actually present as another personality or individual soul in the body of Ramananda Ray. But he (Arjuna) did stay closely connected or related with Ramananda Ray’s existence (entity) and consciousness through certain of his common spiritual aspects. That’s all. But the idea or concept of the split-personality (or splited personality) and/or dual separate personalities in the case of Ray Ramananda is unacceptable in accordance with Siddhanta. On the other hand, the same personality, but with different aspects, characteristics in harmonious co-existence (without rasabhasa), is quite acceptable, with regard to Srila Ray Ramananda.

As regards your query, “in this case how several liberated souls can be present in one body? There must be 2 or 3 souls then inside of one person. if they can not mix, in which way they show themselves?” — answer is — well, certain finely tuned understanding is necessary in order to realise such case or reality. It’s neither that
several liberated souls are present in one body, nor they exactly mix with one another in the body of Ramananda Roy. It is completely of another dimension or frequency of understanding which is distinct from the aforesaid concepts.

The distinction is subtle, but a prominent one. (Just as when you catch different frequencies in a radio set or TV set, the difference [i.e. differentiating gap] between shifting/s or switching/s from one into another may seem a little one, but, in fact, it’s not so, the frequencies or channels are rather quite distinct from each other.)

Then, what is that another dimension of reality in this regard? That is — expansions/manifestations of one through relational closeness…in other words, such expansions or representations actually happening through close relational sharing and absorption of one another’s common personal aspects, qualities, tendencies, tastes, moods, emotional feelings etc. That’s how one finds or feels his/her expansion (i.e. through common spirits & moods…) in the form, being or identity of another…that’s often how it is and what it is (as arranged by the will of Lord) when someone is called an expansion or incarnation of another in the spiritual world/s filled with various (variegated) wanders, inter-relational dimensions and characteristics sharing certain common identities…

Q. Or Arjun is present there but manifests just in another dimension of which we dont have overview?

Answer : Arjuna is present there in spirit or through his common spiritual identity or character, and not exactly by/with his separate individual self which is considered as distinct or different from Ramananda Ray (in spite of their greatly common characteristics). Hence, the aforementioned kind of Arjuna’s presence is there in Sri Ramananda Ray and it normally manifests in another dimension (different from Sri Visakha Sakhi’s level) which we may or may not have overview always.

Question may arise, “well, many devotees often have some common spiritual aspects, qualities or characteristics with others. Does that necessarily mean they are expansion/s or incarnation/s of each other? The answer in brief is ‘no’. Because, they have something in common in general, but not in (with) specific or special integrity of closeness which is arranged by Will divine…

There is always a difference between something common in general and something common in special or particular…both the levels are different from each other. One may have something in common with others, but not necessarily the close or intimate bond of spiritual relationship/s (objectively and subjectively qualified) in order to be specially considered as an incarnation or expansion, which is specifically arranged or sanctioned by the divinity. Hence, again, there is a categorical difference between these two cases.