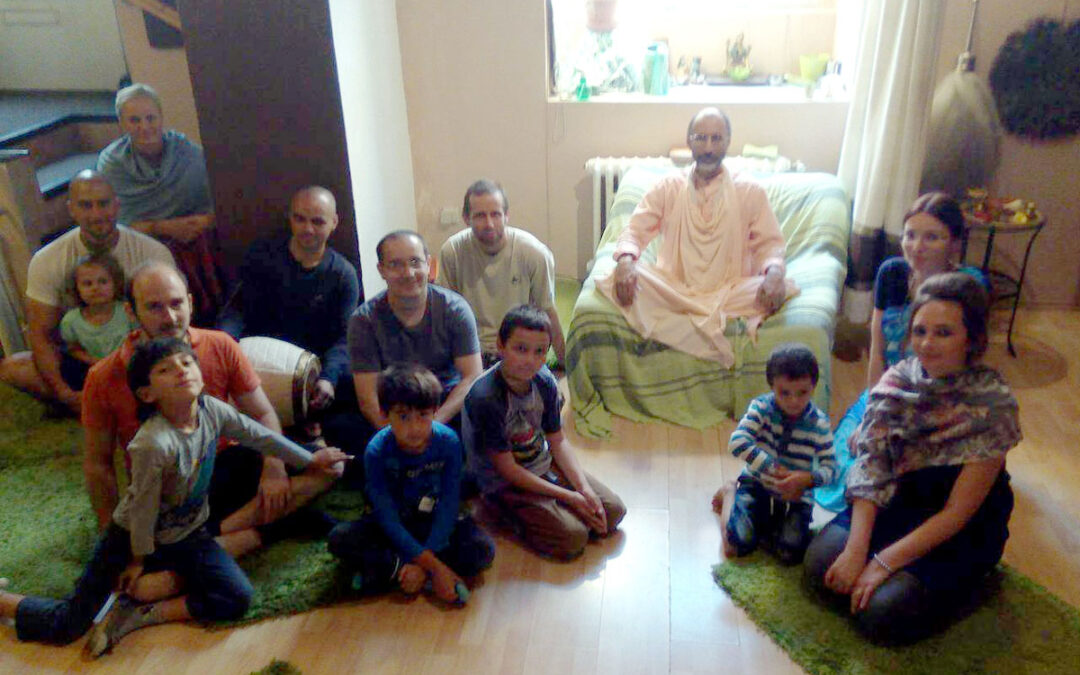 One of the crucial, ever repeating questions is: How did we get to this material world? Where do we come from and what lays behind our manifestation. Srila Bhakti Nandan Swami Maharaj explains essential philosophical questions about Jiva -soul, marginal potency of Krishna in this highly inspirative lecture held in Prague, 2018.

Jiva by nature is known as marginal potency, tatashta-shakti of Krsna. There are three kinds of Krishna’s potencies: antaranga-shakti (internal energy, yogamaya), bahiranga-shakti(external potency, maya) and tatashta (jiva-shakti, marginal potency). In a state of marginal potency jivas are existing in eternity. In some way they are born in marginal potency, tatashta-shakti and that divinely mystical act cannot be fully conceived by human brain because nature of birth is without beginning, although we logically think in beginnings and ends.
Nobody can mathematically calculate when that individual spirit soul, jiva-shakti was born. It happened in the time immemorial, beyond the mathematical calculation or any human calculations of time. History is without beginning and the nature of existence of all the spirit souls, jiva-souls is from the marginal plane. The nature of the consciousness is that of marginal type. The conscious being is endowed with free will and also beyond the mundane influence of mahamaya energy, beyond the influence of bahiranga-shakti. The nature of the marginal plane of Krishna’s energy is existing, designed in such a way and it’s Krishna’s sweet will that it is neither influenced by internal energy (antaranga-shakti) nor external energy (bahirangha-shakti). At the same time it remains connected to both sides, yet, not really connected.
This such nature is explained through Achintya-Bheda-Abheda principal – beloved- simultaneous oneness and distinction which is finally inconceivable by the intellectual calculations and intelligence. It is not possible to fully understand Krishna’s energies. Relative concept of Achintya-Bheda-Abheda can be realized in a relative sense, when one comes to the level of relative perfection. In terms of the absolute conception, it still remains inconceivable.
Because nature of the absolute reality is realized to be a whole, we are unable to understand it properly since our thought process is always making categories and trying to divide whole into smaller pieces. In that way, Absolute Reality remains inconceivable on the thought level, because world of the calculation and intellectual knowledge is too limited to understand Absolute Supreme Reality in wholeness.
That’s why Mahaprabhu brought up the term Achintya-Bheda-Abheda, inconceivable oneness and distinction at the same time, which seems to be contradictive from this material perception. It is the union of the two realities.
As a marginal potency jiva-shakti is related to both aspects- that of antaranga-shakti and that of external potency, bahiranga-shakti. Still, jiva-nature is separate entity; it’s neither this or that and that is in its marginal nature.
Before coming into mundane plane of existence jiva-shakti naturally exists endowed with full free will. At the same time, that free will gets generated in the life of jiva-soul under certain type of atmosphere of the marginal level, because there are influences of both Yogamaya and Mahamaya. Being influenced either from the side of Yogamaya or Mahamaya or according to the constitutional taste in dormant position, it mystically happens that free will of jiva-soul is at the same time influenced and making its own free choice – which is by the nature of marginal potency (marginal reality) happening at the same time and through that mystical act jiva-soul is coming from Paramabrahman level, level of the Brahman realization.
Marginal state of existence is somewhat like impersonal Brahman realization, yet it’s not completely impersonal. That is the level of subtle energy, divine consciousness, very subtle energy of Krishna. At the same time within that are some individual energy units of personal character.
It’s the mixture of the personal and impersonal concept, even on the plane of Brahman and it’s something very subtle, beyond our concept. It may seem to be self-contradictory but still it’s the reality which doesn’t depend on our capacity of understanding.There are many realities in the universe that we are not able to understand, that are happening in their own way. Srila Sridhar Maharaj describes such realities as a super subjective realities.
And that is how some jiva-souls go toward Yogamaya and get liberated and directly enter the divine abode – Krishnaloka and some toward Mahamaya and participate in activities of the mundane plane of existence. Both sides of the actions of the jiva-souls are made by the free choice but that free choice is at the same time influenced by both sides of Krishna’s energies, while every jiva-soul has its own individual identity.
From this rises the next question: why should jiva-soul take the full responsibility in suffering from karmic activities since its free will is not totally free?
At the same time it is free will and influenced by both internal and external potencies of Krishna. Because of the influence of the two sides it is possible for the jiva-soul to relate to the both sides, otherwise it would have no shelter in the origin. Since it still has some free choice, through participating in activities it is making karma.
Then, if it is so, why should jiva-soul keep suffering when it’s not fully responsible since it is influenced by both energies?
Question to that answer you can find by watching the full video:
https://www.youtube.com/watch?v=tNI4WHsss7g&t=1167s
Text and editing by Indulekha devi dasi